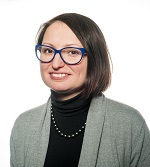 Alexandra F. Yakovleva is a specialist in the history, theory and methodology of political science, the history of social and political thought, and philosophical problems of politics.

Alexandra F. Yakovleva was twice the grantee of the Russian Federation President Grant for young candidates of sciences (2011 and 2013), as well as led two research projects of the Russian Humanitarian Science Foundation and the Russian Foundation for Basic Research, participated in more than 20 research projects with the support of Russian scientific foundations and the Ministry of Education and Science of the Russian Federation. For a number of scientific works, Alexandra F. Yakovleva was awarded the Moscow Government Young Scientist Award for 2015 in the category “Social Sciences”, and is the Deputy Chairman of the Moscow Government Award winners Association. Since 2018, she has twice won competitions under the Development Program of Lomonosov Moscow State University in the category “Outstanding publications”.

Scientific and technological trajectories: the experience of applying socio-humanitarian approaches to forecasting

Stratification of the lexicon of the modern Russian language and its reflection in the explanatory dictionary: ways of the discussion (round table review)